Snapshots of World War 2: My Grandmother 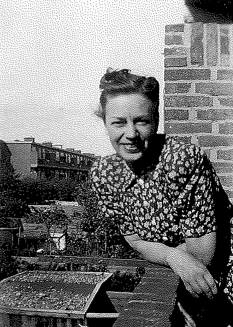 Here is a nice shot of my grandmother, Jacoba Stoltenkamp Hurkmans, leaning against the balcony. She was 41 when the war began. My aunt Netty (which is where my “Antoinette” comes from) was seven years younger than my mother and was sent away to the country for the better part of the war so she would be safe and would have at least some food to eat. The Netherlands was devastated after the war and after my parents settled in Houston, my grandparents and aunt emigrated to the U.S.

I don’t remember much about my Oma as she died when I was very young. I do know that my grandfather, in keeping with the men of his generation, did not want her to work so she and my mother devised a plan whereby they would pretend to go shopping on Saturday morning, not returning until after six o’clock. During that time, my grandmother worked in the glove department at Sakowitz, a very upscale department store in Houston. My mother, of course, always worked, no housewife she.