Why are Writers Crazy and Hard to Live With? 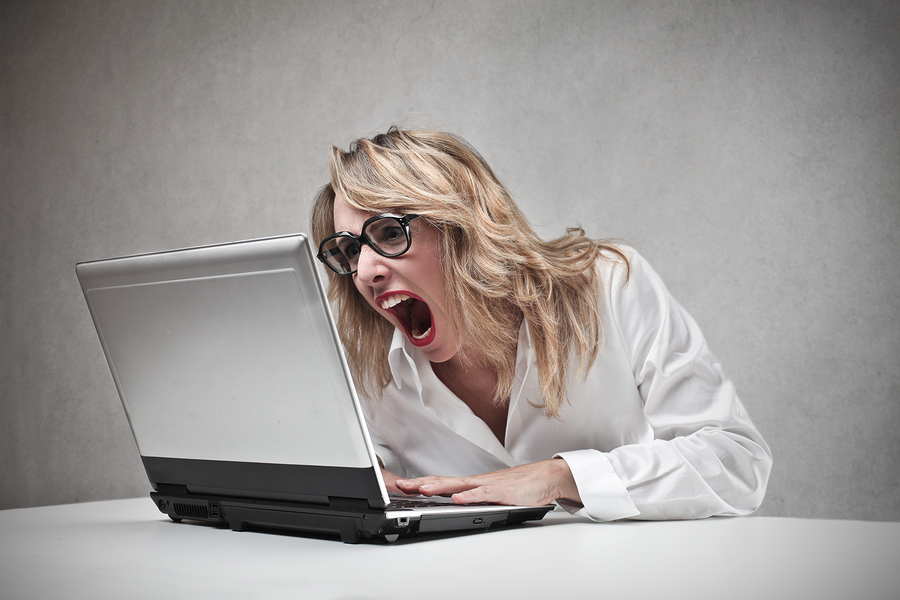 Okay, don’t get too excited.  No, that isn’t me in that photograph.  You think I’m nuts?  That I’d let anyone who cares enough about what I say actually see me the way my husband has to see me at various points during the writing process?

But we are.  We’re all crazy.  And I know this is exactly what I look like far too often when my kind husband is making my dinner (so I won’t starve because I’m writing), or finding bad reviews of really famous writers’ books (when the first bad review comes out on the book I’m currently publishing), or when a copy editor has spelled the word “priapism” wrong for the fiftieth time.  The guy really should look it up and use it at a party.  Then maybe one day he’ll find himself defining the word.  (It means having a perpetually erect penis.)

And it isn’t like I don’t know when I’m boiling up to the red marker just under the “raving lunatic” sign on the moodometer.  It will all begin happily enough.  A run with the dogs in the morning.  A lovely cup of coffee with my husband, who we’ll call Job.  Preparations to go into my studio for as many hours of real work as my increasingly addled brain is capable of.  Phoebe, the gray Great Dane ghost, follows me everywhere.  Here she is so you don’t have to imagine her. 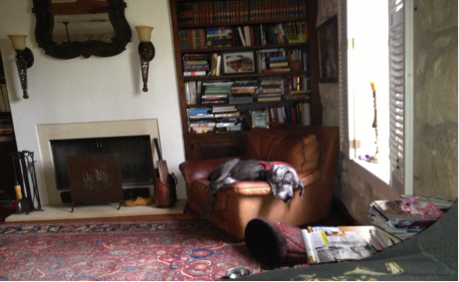 Phoebe is in repose.  In fact, Phoebe is in repose about 23 hours a day.  I love that about her because I am rarely in repose of any kind.  She wraps herself around chairs that belong to my husband.  Or jumps on the bed if there is the hint of rain.  Every tried sleeping with a 150 lb. quaking dog?  In any event, she is my writing companion.  Off to the studio we go.

And we settle in.  I do things I suspect a lot of writers do when they first sit down in front of their computers.  They fuck off.  Excuse the language, but that’s what I do.  Oh, the floor needs sweeping.  The computer monitor has a blur on it – can’t you see that?  And I forgot to take out the small trashcan (when will I learn I fill it up with creative offal every day and I need a BIG one?)  Okay, hammer out a few emails, turn off the cellphone, resist the impulse to surf the Net – I’m doing great.

I open the current task of the day.  A synopsis of my third novel, Finding Marianne, the sequel to Saving Max.  Unfortunately, I’ve somehow managed to do about a hundred outlines and five synopses of this novel already because it was supposed to be a very different story about a year ago.  Now I have the unenviable task of trying to extricate parts of one novel and implant them into another.  Tricky surgery on the best of days.  Organ donation.

And then I hear it.  I forgot to turn off the sound on the text messages on my cellphone.  Damn!  I ignore the first ten.  Now it’s the email messages.  Then I can’t stand it.  Cursing in Dutch (so much more satisfying with all the gutturals you are permitted), I click on the cellphone while simultaneously opening Mail on my desktop.  All hell has broken loose, or so it would appear, on the PR front.  I am in the beginning contractions of the PR launch of my second novel.  Ten centimeters is so far away you can’t even imagine it.  It wasn’t like this the last time around.  Without going into too many details, let’s just say I wasn’t born to splatter myself on Facebook or twit my Tweets to the world.  Or write blogs like these (although I’m actually enjoying this one very much!).  The next time I look up, I’ve lost four hours.  Press releases, emails lists, contacts, targets, social media.  I kick the table.

Phoebe actually raises her head and gives me a reproving look.  Work lasts four hours and she hasn’t even dipped into her REM sleep yet.  I feel my hands crawl up to my scalp and I yank my hair.  No, I do not scream.  I am a civilized, middle-aged woman.  Okay, thanks a lot, I’m older than middle-aged.  I’m a Baby Boomer, for God’s sake, we’re almost extinct!  I take a deep breath.  And walk back into the house.

What?  What?  I know you’re riveted to the page, wondering how I abuse my poor husband as I storm back inside.  Do I scream at him?  Rattle the pages of idiocy I’ve been trying to fix?  Rail at the universe?  No, of course not.

He isn’t there.  He isn’t stupid.  This isn’t his first rodeo.  It’s my second book, remember?

Would I have done any of the above?  Of course!

So if you can’t do anything else smart as a writer, do this.  Don’t marry another writer.  And don’t marry a nut.