What I’ve Been Up To

Written by Antoinette van Heugten on July 22, 2013 — Leave a Comment

When SAVING MAX came out in 2010, I had no idea that it would find an audience and certainly never expected that it would become a bestseller. No first-time author thinks that – at least not me! As with so many debut authors, I was just thrilled to have the book published.

Now three years later, it has sold over two hundred thousand copies and is now being re-released by MIRA this month. I am so honored by the warm reception the book has received and I am excited to share news of my next project with you.

I have been hard at work for the past two years and am now happy to introduce my second novel, THE TULIP EATERS, a different kind of thriller and one I hope all of you will enjoy just as much as you did SAVING MAX. It is currently available for pre-order by Amazon and Barnes and Noble and is scheduled for release in October 2013.

In a riveting exploration of the power the past wields over the present, critically acclaimed author Antoinette van Heugten writes the story of a woman whose child’s life hangs in the balance, forcing her to confront the roots of her family’s troubled history in the dark days of World War II.

It’s the stuff of nightmares: Nora de Jong returns home from work one ordinary day to find her mother has been murdered. Her infant daughter is missing. And the only clue is the body of an unknown man on the living-room floor, clutching a Luger in his cold, dead hand.

Frantic to find Rose, Nora puts aside her grief and frustration to start her own search. But the contents of a locked metal box she finds in her parents’ attic leave her with as many questions as answers—and suggest the killer was not a stranger. Saving her daughter means delving deeper into her family’s darkest history, leading Nora half a world away to Amsterdam, where her own unsettled past and memories of painful heartbreak rush back to haunt her. 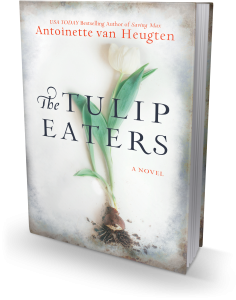 Click the cover to learn more about The Tulip Eaters

This novel has significant personal meaning for me, as my parents were active Dutch resistance fighters in the Netherlands during World War II. They were in their early twenties when the Netherlands was occupied in May 1940 and they lived through five years of terror under the Nazi occupation. Their courage has been an inspiration to me throughout my life and was the impetus for my writing the novel. As a post-graduate student, I was fortunate enough to obtain a grant to study the Dutch Resistance during World War II at the Netherlands Institute for War Documentation in Amsterdam, (then known as RIOD, the Rijksinstituut voor oorlogsdocumentatie, established shortly after liberation in 1945, now NIOD, Instituut voor Oorlogs-,Holocaust-en Genocidestudies.) In 1978, I roamed freely through the stacks of diaries and journals written during the war and donated thereafter by Dutch citizens, familiarizing myself with daily life during the occupation, but also investigating the schism between those who fought against the Nazis and those who sympathized with their cause – members of the Dutch National Socialist Movement, called the “NSB”. The novel is a thriller, yes, but I hope it also provides historical information not commonly known to readers interested in this time period. We are all familiar with the heartrending story of Anne Frank. I think THE TULIP EATERS provides a somewhat different historical perspective on life in Amsterdam between 1940-1945 in the context of a fictional work.

Where did the title come from?

“We have no milk, no bread, no potatoes—just rotten peels. The boys now have to go far into the fields to pull frozen tulip bulbs from the ground. We grind the pulp and make thin soup and watery porridges from them. They are bitter, practically inedible, but we choke them down because otherwise we will starve.”

During the Hongerwinter in 1944, a railway strike was ordered by the exiled Dutch government to further Allied liberation efforts. The Germans retaliated by placing an embargo on all food transports. Gas and electricity were cut off during one of the harshest winters in history. Potatoes and vegetables were long gone. There was no meat, milk, butter, coffee or sugar and not enough bread to feed one person, let alone a family. There was only one thing left to them in the barren fields. Tulips.

Four and a half million people were affected by the famine.

Over 20,000 starved to death. This represents the nadir of the war—Dutchmen forced to forage and choke down their national flower to stave off starvation. It is one of the great ironies of the Dutch occupation

I am currently working on a sequel to SAVING MAX, a novel I felt compelled to write to answer the one question my readers say they want to know: What happened to Marianne?

I promise to answer that question in FINDING MARIANNE. I don’t want to give anything away, but Max, now in his early twenties, is after Marianne with a vengeance, Danielle is still trying to save Max – sometimes from himself – and Marianne is up to her old and new tricks. We’ll see some of the same characters and a few new ones, including an acolyte of Marianne’s who has his own set of bizarre psychiatric disorders that complicate everything.

I’ll be tweeting and blogging about the progress of FINDING MARIANNE regularly.

Posted in Blog
« The Debate About Schooling Autistic Children in a Separate School
Life During Wartime: The Love-Charm of Bombs »